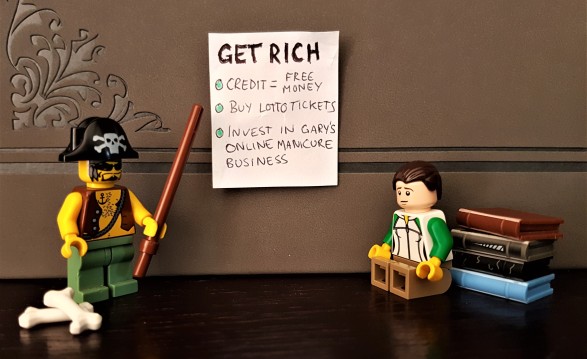 This one is about the folks who don’t have loved ones who are financially stable and happy.

When you start handling your money and life better, it’s probably going to be confronting for the people you know. They might be upset that you no longer want to maintain the lifestyle they are used to seeing you in. They might be angry that you are thinking differently about money, or planning for the future. They might even try to sabotage you. It sounds bonkers, but it happened to me. I had to walk away from people who were only happy when I was doing things their way, and according to their timeline.

Whenever someone gives you advice, look at their situation and see if you think that they are on a path that would suit you. This applies to a lot of things really.  If angry Lucy from work tries to tell you that your partner isn’t good enough for you, or that your taste in xyz is stupid, I’m hoping you’d politely disengage, and get away from her. When it comes to people giving life advice, I tend to first mentally check them over to see if they are generally happy people. Are they kind, thoughtful and generally good? I don’t care how successful someone is in their career or how good their financial situation is, if they aren’t happy, then their way of living probably won’t suit me. It probably doesn’t even suit them.

When it comes to financial advice, sometimes we take it because we like the person offering the advice, and we don’t do any real critical thinking.

Old uncle Marvin tries to give you stock and business advice? If this is the same guy who takes out pay-day loans, or is convinced he will win the lotto, you’d be mad to listen. Your well paid but broke sister tells you to buy an apartment within 10km of the CBD and not worry about the loan to value ratio? Again, why on earth would you take her advice?

Your friends tell you it’s OK and normal to take out a loan to go on holiday or to an event? NO. It’s not. Doing that is monumentally foolish. If you don’t have the self control or the income to save enough for a holiday, what makes you think that paying down a loan is going to go well?

Your dad says not to worry too much about savings because he’s going to leave you his house. Why can’t you listen to that? He’s a good guy, you trust him and he’s never done you wrong. You can appreciate it, and be grateful, but don’t count on that house. Dad might decide to enjoy his retirement, sell his house and burn through the money like a wildfire. He might remarry and leave everything to his new wife. He might go crazy over his grandkids and decide to leave everything to them so that they can get a good financial start in life. Or, he might need to use it to pay for carers and medical expenses as he ages.

If you are in a lousy financial place now, you didn’t get that way by listening to good advice. So should you listen to any advice from the people you know? Sure, but again, it’s only if you think the person you are getting advice from is in a place where you want to be. You also have to be prepared to take responsibility for yourself. Your well-paid friend Peter might give you an overview about how he went about purchasing a house, but you can’t then follow his example and get mad when you can’t afford the same repayments.

I personally made a decent bit of money from trading penny stocks. Each one was a huge gamble, and I would never advise anyone to do that. I could have lost everything, which didn’t matter much when we didn’t really have anything to start off with. I quite seriously started each trade with telling MongrelPunt “I’d like to buy into this company. It’s probably going to go bust, and we will lose x much money. That ok?” It was a hobby, not a financial strategy.

Keep in mind that your friends and family who are in a good financial position may not have advice that applies to the world today.  A lot of older people in Australia were working when mandatory retirement was abolished in the 1990s (I believe all states abolished mandatory retirement in 1999). They directly benefited from having senior staff leave their roles, thus creating vacancies and opportunities for younger staff. However, they also had to suffer when they or their older loved ones were forced into a retirement that they were unprepared for.

A friend of mine bought her large 4 bedroom house in the 70s, and paid around $11000 for it. She certainly would never assume that it’s easy to buy a house, but that number just blows me away. The average weekly earnings in 1970 were around the $73 mark. Compare those numbers to the amount that same house is worth now (around $800000) along with the 2017 Full-Time Adult Average Weekly Ordinary Time Earnings of $1543. In the 70s, it would have cost 3 times the average annual wage to buy my friend’s house. Now, it would cost 10 times the average. But if you take into account inflation levels over time, and interest rates, suddenly it becomes clear that different generations have had different issues to tackle. Interest rates in 1990 hit 17%. I don’t know many people who could financially absorb rates like that today. I don’t even know anyone who would be capable of servicing a loan with an interest rate anywhere near that.

So how do you respond to annoying advice, like suggestions that you stop drinking coffee in order to buy a house in a suburb you detest? Depending on who it is, there’s a range of cookie-cutter responses. If you’re not going to see your girlfriend’s great-Aunt again, then “Oh that’s an interesting idea. I’ll give it some thought” would probably be suitable. If it’s someone you see regularly, it’s OK to tell them “thanks for thinking of me, but we have really different lives and I’m working on a plan that suits my situation best”.

If you get a LOT of advice from people, it would be worth examining how you are interacting with them. If you constantly complain about your living situation or your job or your lack of funds, it’s pretty natural for the people around you to try to offer you support and advice. There’s a big difference between saying “I can’t go, I can never afford anything!” and “Stuff like this just isn’t in my budget right now”. Keep in mind that some people are just awkward (hello!) and might just be trying to connect with you in the only way they know how.

You can definitely benefit from listening to how your loved ones achieved their goals and lifestyle. A lot of it was hard work, and hearing about that isn’t bad at all. But don’t get sucked in by expectations or assurances that if you work hard, and save, you will be able to pay off your mortgage in no time, because that’s how Uncle Dave did it. Don’t listen to people who dismiss your job or career because they don’t understand it. Don’t listen to friends who say you’re boring now that you don’t spend as much money, or that you’ve “been whipped” or are “under the thumb” when you start working together with a partner to get your finances together. Educate yourself, be confident in your choices and understand that it’s OK if you make mistakes. You do you.